The Oxygen project was approved on Thursday 24 October by the city councilors.

This project intends to ban old and polluting cars from the Bucharest roads and introduces a new vignette based on pollution norms.

Starting with January 1st 2022, the access of vehicles within the Municipality of Bucharest based on non-euro, Euro 1 and Euro 2 pollution norms will be forbidden.

Starting with January 1st, 2024, the access of vehicles with a Euro 3 pollution norm is forbidden.

Scooters and motorcycles, as well as cars that run on LNG (Liquid Natural Gas), CNG (Combusted Natural Gas) and LPG (only Euro 3) are exempt from the provisions of the vignette.

Starting with January 1, 2020, the access of vehicles with a maximum authorized total mass of less than 5 tones on the Bucharest roads is restricted daily, from Monday to Friday, except from legal holidays, within 7a.m. and 10 p.m.as it follows:

a) for Electric Vehicles, hybrid or cars with the Euro 5 and Euro 6 pollution norm, the access is allowed without restrictions on all the roads;

b) for cars with the Euro 3 and Euro 4 pollution norm, access is allowed on all roads in Bucharest only after the purchase of an electronic Oxygen vignette;

c) for cars with the non-Euro, Euro 1 and Euro 2 pollution norm, access is forbidden in the Air Quality Action Area (ZACA)*, being allowed for the rest of the areas in Bucharest only following the purchase of an Oxygen electronic vignette.”

Drivers who do not have the appropriate vignette will be fined with penalties from 1,500 to 2,000 lei. Cars of public institutions are exempted from payment of the vignette. 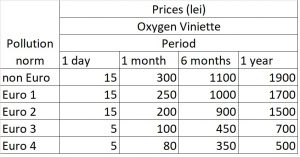 To check if your car is subject to the project above, please check the first registration date of your vehicle and compare it with the table below.

We at Business Lease understand and support the current government measures to curb the spread of COVID-19 but despite this we will assure you the maximum possible mobility services for you and your fleet.

We act according to our company values and understand how important it is to maintain the maximum mobility for all our customers and drivers.

Below you will find actual information of our services applicable during the present situation:

Please contact your account manager in case of any further information. Any information regarding the operation of Business Lease Automarket please go t0 www.automarket.businesslease.ro

Thank you for the cooperation and we believe that together we will manage the current situation.